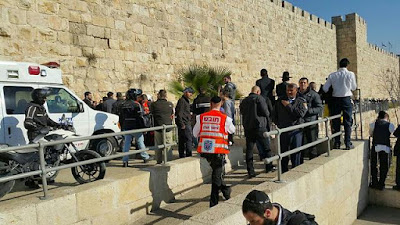 Updated. Two Palestinians from Qalandiya were shot and killed after carrying out a stabbing attack at the Jaffa Gate of East Jerusalem’s Old City, Israeli police said. The attack left one Israeli killed and another injured, while Israeli media reported that a third Israeli was accidentally shot at the scene and later succumbed to his wounds.
Israeli police spokesperson Luba al-Samri said that the Israeli that was shot at the scene was likely hit by live fire when border guards opened fire on the attackers. The border guards stationed at the Jaffa Gate are female police officers. Following the attack, one Israeli reportedly died from stab wounds, while another is in moderate condition.
One Palestinian was killed on scene, and the Ein Kerem branch of Hadassah hospital confirmed that the second died shortly after arriving to the hospital.
The Palestinians were identified as Issa Assaf (19) and Anan Abu Habsa (20) from Qalandiya in the occupied West Bank. The area has recently been site to heightened tensions, with two Palestinians killed in the Qalandiya refugee camp last week after attempting to run over Israeli soldiers present in the camp during a predawn arrest raid. The gunfire victim was named as Ofer Ben-Ari, 46, a married resident of Jerusalem and father of two. The man who was fatally stabbed was Rabbi Reuven Biermacher, 45, a married father of seven.
The Jaffa Gate area --the site of Wednesday's attack and the most commonly-used entrance into the Old City by Jewish Israelis and tourists -- was closed by Israeli Border Police following the attack, witnesses in the area said.The Damascus Gate located nearby was also closed.The incident marks the fourth in Jerusalem this month that resulted in the death of a Palestinian who attacked and injured Israelis. Hundred and thirty two Palestinians have been killed by Israeli military forces and settlers since violence increased at the beginning of October. Twenty Israelis were killed in attacks by Palestinian individuals during the same time period, while at least one died from 'friendly'Israeli fire.
The circumstances of several deaths have been under investigation by rights groups who say that Israeli forces have implemented a "shoot-to-kill" policy, resulting in the death of Palestinians who didn't pose an imminent threat at the time of their death.
Posted by Abu Pessoptimist at 2:40 PM