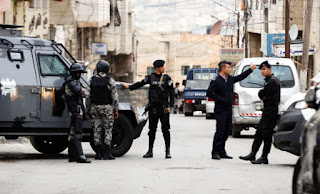 Troops closed the entrances to Irbid during a firefight with the ''Ibid terror cell'' in March 2016.

Jordan hanged 15 death row prisoners at dawn on Saturday, in a further break with a moratorium on executions it had observed between 2006 and 2014. Ten were convicted of "terror" offences, including attacks on tourists, a writer, and security forces. Five others were convicted of crimes including rape, Mahmud al-Momani, Jordanian information minister told the official Petra news agency. The group of 10 were part of the so-called "Irbid terror cell", which was responsible for several attacks.
In 2005, King Abdullah II said Jordan aimed to become the first Middle Eastern country to stop carrying out executions, in line with most European countries. Courts continued to hand down death sentences, but they were not carried out. But public opinion blamed a rise in crime on the policy and in December 2014 Jordan hanged 11 men convicted of murder, drawing criticism from human rights groups. Opinion hardened after the murder by the Islamic State of Iraq and the Levant (ISIL, also known as ISIS) group of captured Jordanian pilot Maaz al-Kassasbeh whose plane had crashed in a rebel-held region of Syria in December 2014. Grisly footage posted in February the following year of him being burned alive in a cage outraged the public.
Posted by Abu Pessoptimist at 5:35 PM No comments:

Egypt's former strongman Hosni Mubarak is able to walk free after the Court of Cassation acquitted him on Thursday in his retrial on charges of killing protesters during the 25 January Revolution. Today's verdict is final.
In June 2012, Mubarak was sentenced by a criminal court to life in prison - 20 years in jail per Egyptian law -  for his complicity in the murder of protestors during the 18-day January 2011 uprising that ended his 30-year rule. However, in January 2013, the Cassation Court overturned Mubarak's conviction and ordered a retrial. The Cassation Court also upheld the acquittal of other defendants in the same case, including Mubarak's last interior minister Habib El-Adly and four of his aides.

Read more »
Posted by Abu Pessoptimist at 11:10 AM No comments: