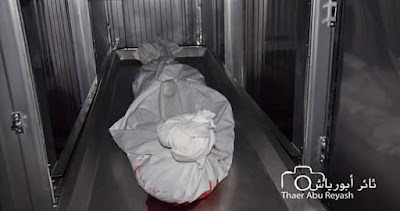 A ten-year-old Palestinian was killed and his sister seriously injured in an Israeli airstrike launched early Saturday in the northern Gaza Strip after rockets were fired from the besieged enclave.
Spokesman for the Gaza Ministry of Health Ashraf al-Qidra confirmed the death of Yasin Suleiman Abu Khusah,10, and told Ma’an his six-year-old sister Israa had sustained serious head injuries during the strike. Israa later died.
A Ma’an reporter based in Gaza said the children were in their house at the time of the strike, located in northwestern Beit Lahiya, adding that the family was still living in their home that was partially destroyed during the most recent Israeli offensive on the strip in 2014. Israa was transferred to Shifa Medical Center in Gaza City from Indonesian Hospital in Beit Lahiya due to critical injuries, al-Qidra said.
The Israeli army said the Israeli air force targeted four Hamas sites in the northern Gaza Strip after four rockets were fired from the strip Friday evening.

Read more »
Posted by Abu Pessoptimist at 10:11 AM No comments: 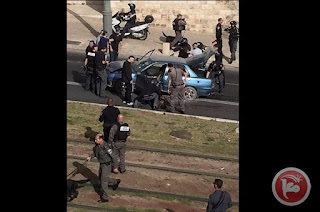 The car in which two Palestinians were shot. (Ma'an)

Israeli forces shot dead a 16-year-old Palestinian boy after he allegedly attempted to carry out a stabbing attack at a military checkpoint outside the blockaded village of al-Zawiya in Salfit district on Wednesday morning.
The incident in al-Zawiya occurred shortly after the Israeli police shot dead two Palestinians outside Jerusalem's Old City after they opened fire in the area -- continuing a string of deadly encounters that shook Israel and the occupied Palestinian territories a day earlier.
Israeli police spokesperson Micky Rosenfeld said the two Palestinians initially opened fire on an Israeli bus in the settlement of Ramot in occupied East Jerusalem, before fleeing the scene without causing any injuries.The shooting sparked a massive manhunt across Jerusalem, with Israeli police later spotting the car outside the Old City's New Gate. Rosenfeld said that a gun battle erupted between Israeli police and the two Palestinians, with both gunmen shot dead. They were later identified as Abdul-Malak Saleh Abu Kharoub,19, and Muhammad Jamal al-Kalouti, 21. A Palestinian bystander was also shot in the head in the crossfire.

Read more »
Posted by Abu Pessoptimist at 12:02 PM No comments:

Ambulances after the shooting in Jerusalem.

Four Palestinians were shot dead after they allegedly carried out separate attacks in Israel and occupied East Jerusalem, killing one tourist from the U.S. and wounding at least 12 others, on Tuesday morning, afternoon and evening.
In the first deadly encounter, shortly before 5 p.m., Israeli police spokesperson Luba al-Samri said a Palestinian man was shot dead after he allegedly stabbed and wounded an Israeli man near Petah Tikva, around seven miles east of Tel Aviv.Al-Samri said that an "Arab terrorist" stabbed a Jewish Israeli in his mid-30s "in the upper part of his body," leaving him with light to moderate injuries.Israeli police forces arrived on the scene and shot dead the Palestinian, she said, adding that Israeli forces closed the area for investigation.
Minutes later, another Palestinian was shot dead after allegedly firing gunshots at Israeli police forces near Salah al-Din Street in occupied East Jerusalem, injuring two Israeli officers.Israeli police spokesperson Micky Rosenfeld said two Israeli policemen were wounded when a Palestinian shot them with an automatic weapon.

Read more »
Posted by Abu Pessoptimist at 6:50 PM No comments:

Israeli members of parliament (the Knesset) renewed their cries that Arab representatives have to be removed after the parties Balad and Hadash, who are part of the Joint Arab List,  Monday criticized the decision of the Gulf Cooperation Council to label Hezbollah a terrorist organization.
"Hezbollah fights against Israeli attacks on Lebanon, and this decision only serves the interests of Israel and the US," a Balad spokesperson said.
The GCC officially decided to label Hezbollah as a terrorist organization last Wednesday. Balad officials explained that they view the decision by the interior ministers of the GCC as dangerous because they are fueling the Sunni-Shia conflict, and adding fuel to the fire of this bloody conflict. Furthermore, the Balad officials claimed, the decision serves to widen the sectarian divisions in Lebanon, Syria, and the wider Arab world.
They also said that "the party doesn't believe that it is correct to tag Hezbollah - an organization which represents a large part of the Lebanese nation - as a terrorist organization, despite criticism over its participation in the fighting in Syria."

Read more »
Posted by Abu Pessoptimist at 10:53 AM No comments:

Prominent Sudanese politician Hassan al-Turabi, a veteran Islamist and leader of the opposition Popular Congress Party (PCP), has died at the age of 84, medical sources said on Saturday.
Turabi, one of the country's most influential political figures, formed the PCP in 1999 to challenge long-serving President Omar al-Bashir and his ruling National Congress Party, with which Turabi had previously been aligned.
He was rushed to hospital earlier on Saturday after suffering a heart attack, the sources said.
Turabi was elected speaker of parliament in 1996 and was close to Bashir before a bitter power struggle and split in 1999.

Read more »
Posted by Abu Pessoptimist at 6:49 PM No comments:

The media keep saying that the West isn't involved in Syria. This is not true 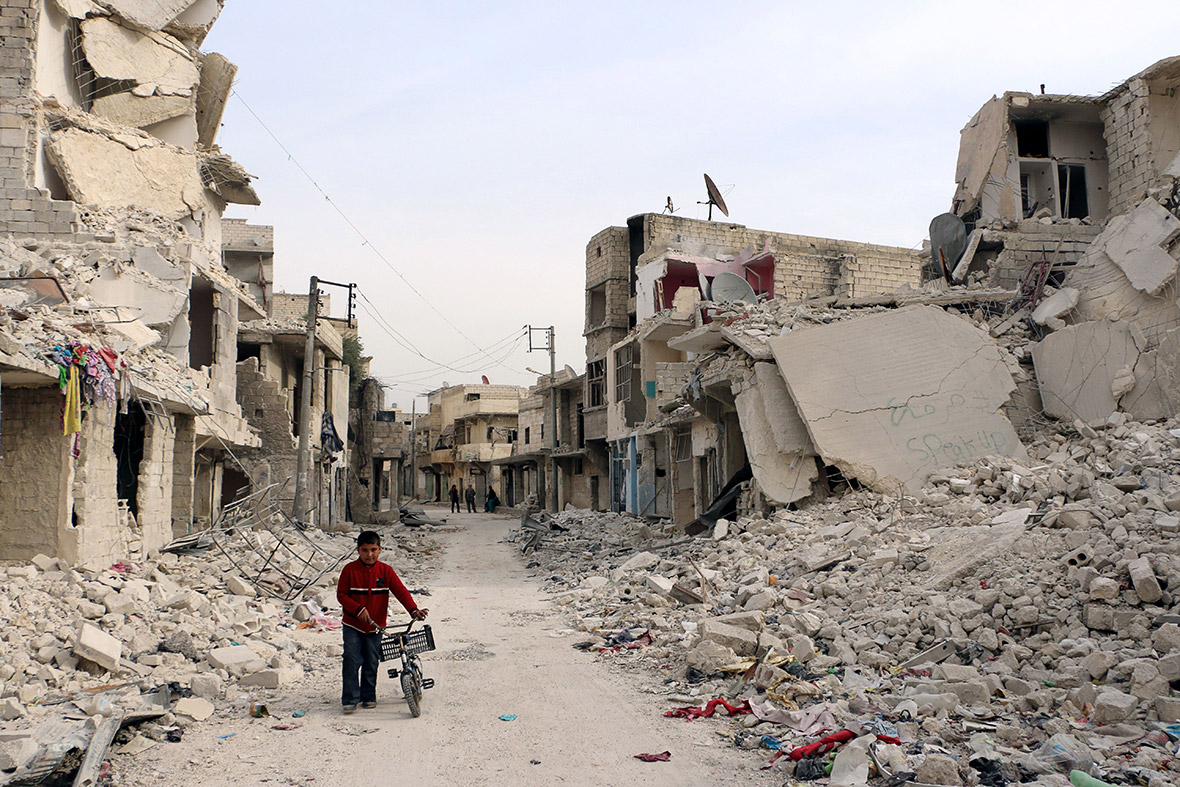 “The sinister fact about literary censorship in England is that it is largely voluntary”, George Orwell noted in his censored preface to his 1945 book Animal Farm. “Unpopular ideas can be silenced, and inconvenient facts kept dark, without the need for any official ban”. Orwell went onto explain that “at any given moment there is an orthodoxy, a body of ideas which it is assumed that all right-thinking people will accept without question. It is not exactly forbidden to say this, that or the other, but it is ‘not done’ to say it”.
The corporate media’s ‘coverage’ of Syria adds a twist to Orwell’s dictum – inconvenient reports and facts do occasionally appear in respected newspapers and on popular news programmes but they are invariably ignored, decontextualised or not followed up on. Rather than informing the historical record, public opinion and government policy these snippets of essential information are effectively thrown down the memory hole.
Instead the public is fed a steady diet of simplistic, Western-friendly propaganda, a key strand of which is that the US has, as Channel 4 News’s Paul Mason blindly asserted in January 2016, “stood aloof from the Syrian conflict”. This deeply ingrained ignorance was taken to comical lengths when Mason’s Channel 4 News colleague Cathy Newman interviewed the former senior US State Department official Anne-Marie Slaughter, with both women agreeing the US had not armed the insurgency in Syria.
In the real world the US has been helping to arm the insurgency since 2012, with US officials telling the Washington Post in last year that the CIA’s $1bn programme had trained and equipped 10,000 rebel fighters. “From the moment the CIA operation was started, Saudi money supported it”, notes the New York Times. According to the former American Ambassador to Syria, the US "has looked the other way" while fighters it has backed have "coordinated in military operations" with the Al-Nusra Front, Al-Qaeda’s official affiliate in Syria. The UK, of course, has obediently followed its master into the gates of hell, with the former UK Ambassador to Syria recently explaining the UK has made things worse by fuelling the conflict in Syria.

Read more »
Posted by Abu Pessoptimist at 3:40 PM No comments: