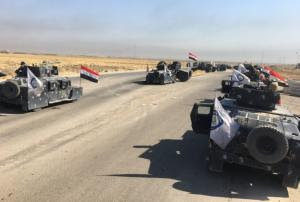 Iraqi army verhicles in the oilfields of Kirkuk. (Reuters)

Iraqi forces have launched a major offensive over several fronts aimed at retaking the Kurdish-held city of Kirkuk, allegedly causing "lots of casualties" in fighting south of the city.
The federal army, backed by Shia militias, said theiy seized control of the city's international airport, in addition to an oil field, the strategic K1 military base and the Tuz Khurmatu district southeast of Kirkuk on Monday.
Kurdish forces known as the Peshmerga were digging in at the edge of the airport after withdrawing from their positions outside the northern city.
Hundreds of armed Kurdish residents were taking up positions inside the city anticipating an attack.
Residents of the multi-ethnic city, home to about a million Arabs, Kurds, Turkmen and Christians, stayed inside and reported hearing sporadic booms they said sounded like shelling and rocket fire.
The Kurdistan Region Security Council said in a statement that the Peshmerga destroyed at least five Humvee armoured vehicles being used by the state-sanctioned militias following the attack south of the city.

Read more »
Posted by Abu Pessoptimist at 11:49 AM No comments: 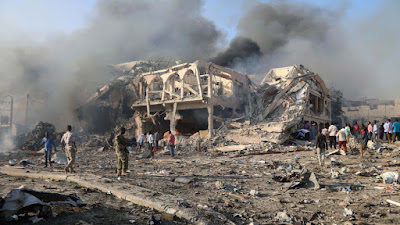 The death toll in the bombing that hit the centre of Mogadishu on Saturday continues to rise, with more than 300 people now believed to have been killed and hundreds more seriously injured.
The scale of the loss makes the attack, which involved a truck packed with several hundred kilograms of military-grade and homemade explosives, one of the most lethal terrorist acts anywhere in the world for many years.
On Monday morning, Somalia’s information minister announced that 276 people had died in the attack with at least 300 people injured. Within hours, however, Abdikadir Abdirahman, the director of Amin ambulances, said his service had confirmed that 300 people died in the blast.
“The death toll will still be higher because some people are still missing,” Abdirahman told Reuters.
More victims continue to be dug from the rubble spread over an area hundreds of metres wide in the centre of the city.

Read more »
Posted by Abu Pessoptimist at 11:00 AM No comments: 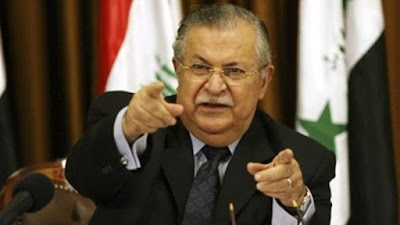 Jalal Talabani, former Iraqi president and Kurdish politician, has died in Germany aged 84. He was Iraq's president from 2005 to 2014 and a key figure in Iraqi Kurdistan, where voters last week overwhelmingly backed independence in a controversial referendum. A family member said Talabani's health had taken a turn for the worse and he been transported to Germany, along with his wife and two children, before the referendum.
Talabani's death, following a decades-old struggle for Kurdish statehood, came after Iraq's Kurds voted 92.7 percent to split from Iraq in the September 25 referendum.
Talabani was an avuncular politician and a skilled negotiator, who spent years building bridges between the country's divided factions, despite his efforts for Kurdish independence.

Read more »
Posted by Abu Pessoptimist at 6:23 PM No comments: