Attacks on hotel in Sousse and Shi'íte mosque in Kuwait 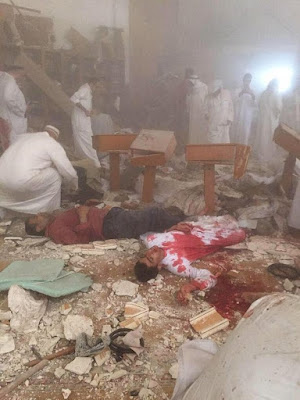 At least 27 people, including foreign tourists, were killed when at least one gunman opened fire on a Tunisian beachside hotel in the popular resort of Sousse on Friday, an interior ministry spokesman said.
Police were still clearing the area around the Imperial Marhaba hotel and the body of one gunman lay at the scene with a Kalashnikov assault rifle after he was shot in an exchange of gunfire, a security source at the scene said.
It was the second major attack in the North African country this year, and took place during the holy Muslim month of Ramadan.
"One attacker opened fire with a Kalashnikov on tourists and Tunisians on the beach of the hotel," said a hotel worker at the site. "It was just one attacker. He was a young guy dressed in shorts like he was a tourist himself."
Tunisia has been on high alert since March, when Islamist militant gunmen attacked the Bardo museum in Tunis, killing a group of foreign tourists in one of the worst attacks in a decade in the North African country.

Read more »
Posted by Abu Pessoptimist at 5:12 PM No comments:

"We believe that what led to the drop in investment in Israel are Operation Protective Edge and the boycotts Israel is facing," Dr.
Roni Manos of the College of Management and one of the authors of the report's summary told Ynet.
Read more »
Posted by Abu Pessoptimist at 12:11 PM No comments:

The Egyptian Committee to Protect Journalists said on Thursday that at least 18 Egyptian journalists are in jail for reasons related to their reporting. The CJP based this on a prison census it conducted on 1 June. It is the highest number of detained journalistsin Egypt since the CPJ began recording data on imprisoned journalists in 1990.
"The threat of imprisonment in Egypt is part of an atmosphere in which authorities pressure media outlets to censor critical voices and issue gag orders on sensitive topics," the CPJ said in a report published on Thursday.
Khaled al-Balshy, the head of the freedoms committee of Egypt's press syndicate, said the number of journalists imprisoned was higher, putting it at more than 30. "We are in the worst climate for journalism in Egypt's history," he told Reuters.
CPJ said most of the journalists imprisoned are accused by the government of belonging to or being affiliated with the Muslim Brotherhood, which Cairo designates as a terrorist group. Authorities say the Brotherhood is a threat to national security.
A government source told Reuters that "the numbers are not accurate and the report is not objective." The source said all imprisoned journalists were facing criminal charges and were not imprisoned for political or free speech reasons.

Read more »
Posted by Abu Pessoptimist at 10:54 PM No comments: The Guardian:
A United Nations inquiry into the 2014 Gaza war has accused Israeli and Palestinian factions of multiple potential violations of international law including suspected war crimes. Calling on Israel to “break with its lamentable track record” and hold wrongdoers responsible, the hard-hitting report commissioned by the UN human rights council laid most of the blame for Israel’s suspected violations at the feet of the country’s political and military leadership. The commission said leaders should have been aware as the war progressed that their failure to change course was leading to huge civilian casualties. “Those responsible for suspected violations of international law at all levels of the political and military establishments must be brought to justice,” it says.
Israel, which refused to co-operate, said on Monday the report failed to recognise the “profound difference” between “Israel’s moral behaviour” and the “terror organisations” it confronted. The Israeli prime minister, Binyamin Netanyahu, said: “The report is biased. The commission that wrote it is under a committee that does everything but protect human rights.”
Hamas also rejected the findings. Senior official Ghazi Hamad said on Monday that its rockets and mortars were aimed at Israeli military sites, not at civilians.
The report accuses both Hamas and the Israeli military of breaches of international law in the way they fought the conflict. The UN commission says it gathered “substantial information pointing to serious violations of international humanitarian law and international human rights law” by both sides.

Read more »
Posted by Abu Pessoptimist at 3:50 PM No comments:

The Independent:
Israel's Knesset has extended a law that bans Palestinians married to Israelis from living with their spouses in Israel for another year.

The law was first passed in 2003 and extended in 2008, and forbids Palestinians married to Israelis from living in Israel, or becoming Israeli citizens.Many critics say that the law essentially makes marriage between Israelis and Palestinians impossible, as the couple would have to live in different countries that are very difficult to pass between.
The law was first introduced as a temporary security measure that would only last for a year, aimed at preventing potential terrorists coming into Israel through marriage.

Read more »
Posted by Abu Pessoptimist at 11:55 AM No comments:

Cairo Criminal Court upheld a death sentence against former President Mohamed Morsi and five others on Tuesday for a mass prison break in 2011. The five others are Muslim Brotherhood Supreme Guide Mohamed Badie, Saad al-Katatny, Essam al-Erian, Mohamed Rashad Bayoumi and Mohie Hamed. Apart from tht the ourt handed  20 life sentences to prominent Brotherhood leaders, including Safwat Hegazy, Sobhi Saleh, Mohamed al-Beltagy and Saad al-Hosseini. Sixteen defendants were sentenced to two years, 94 death sentences were upheld in absentia, eight defendants were handed two years in absentia, and one was given three years in absentia.
The death sentences were originally issued in May, and according to state-owned Al-Ahram newspaper can still be appealed.
Morsi and 16 others were also sentenced to life in prison earlier on Tuesday for espionage. A life sentence under Egyptian law is 25 years.
The court also sentenced prominent Muslim Brotherhood leaders Khairat al-Shater, Mohamed al-Beltagy and Ahmed Abdel-Aty to death by hanging, along with 13 others in absentia. Two other defendants were given seven-year prison sentences.

Read more »
Posted by Abu Pessoptimist at 1:38 PM No comments:

At least 163 people have been forcibly disappeared and illegally detained by security forces in the past two months alone, according to a document published by the Freedom for the Brave campaign on its official Facebook page.
According to the group’s breakdown of these cases, 66 activists have gone missing in this time period, and their whereabouts are still unknown. Another 64 people were only located after they had been detained without charges or interrogation for more than 24 hours in an undisclosed location, in violation of the Constitution. Another 31 cases cited in the document have not yet been verified by the group.
At least two of the people included in the list were allegedly killed by security forces, including Ain Shams University student Ismail Atito and Sinai resident Sabry al-Ghoul.

Read more »
Posted by Abu Pessoptimist at 4:43 PM No comments:

President Abdel Fattah al-Sisi of Egypt has presided over the flagrant abuse of human rights since taking office a year ago pledging to restore stability. Violence by armed groups and the government has escalated, Human  Rights Watch said in een report released on 8 June. The United States and European governments should stop overlooking Egyptian government abuses, including a lack of accountability for many killings of protesters by security forces, mass detentions, military trials of civilians, hundreds of death sentences, and the forced eviction of thousands of families in the Sinai Peninsula, according to HRW.
Over the past year, al-Sisi and his cabinet, governing by decree in the absence of an elected parliament, have provided near total impunity for security force abuses and issued a raft of laws that severely curtailed civil and political rights, effectively erasing the human rights gains of the 2011 uprising that ousted the longtime ruler Hosni Mubarak.
“The al-Sisi government is acting as though to restore stability Egypt needs a dose of repression the likes of which it hasn’t seen for decades, but its treatment is killing the patient,” said Joe Stork, deputy Middle East and North Africa director. “What makes it worse is that Western governments that subordinated human rights in their relations with Egypt during the Mubarak era seem ready to repeat their mistake.”
No member of the security forces has been held accountable for the mass killings of protesters that followed the military’s July 2013 removal of Mohamed Morsy, Egypt’s first freely elected president, which al-Sisi orchestrated as defense minister. These included the killing of at least 900 people in a single day, August 14, during security operations to clear protest sites in Cairo. The killings amounted to probable crimes against humanity. However a government-commissioned fact-finding committee that investigated these events released only an executive summary of its findings in November 2014 and Egypt’s prosecutor general has never announced an independent investigation.

Read more »
Posted by Abu Pessoptimist at 2:10 PM No comments: 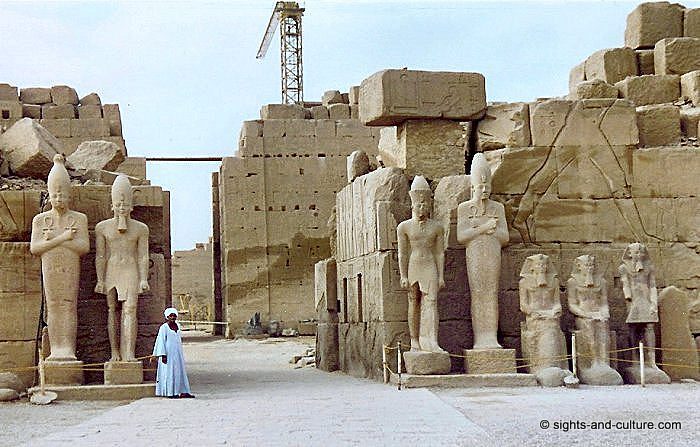 Statues inside the tempel of Karnak.

Egyptian security forces have foiled an attack on the Karnak Temple, an important tourist site in the southern Egyptian city of Luxor, killing two militants and injuring a third, the interior ministry has announced. Police prevented the three from entering the Karnak temple on Wednesday morning.Two of the militants were killed and another injured when a bomb one of them was carrying blew up. One of the temple staff was injured, but there were no casualties among temple visitors or security forces.

There was no immediate claim of responsibility for the attack, which carries the hallmark of Islamist militants based in the border Sinai region who have escalated deadly attacks since the 2013 overthrow of Islamist president Mohamed Morsi. The violence had previously spared tourist sites, mostly targeting security checkpoints and government infrastructure with bombings and shootings.

Read more »
Posted by Abu Pessoptimist at 1:27 PM No comments:

Egyptian court: Hamas not a terrorist organization after all

An Egyptian court overturned a decision naming Hamas a terrorist organization Saturday, a ruling coming after months of increasing hostility to the blockaded rulers of the Gaza Strip. The Urgent Matters Appeals Court cited a lack of jurisdiction as the reason for annulling the earlier court's ruling.
Sami Abu Zuhri, Hamas spokesman in Gaza, welcomed the court's ruling, saying it would have "positive consequences on the relationship between Hamas and Egypt."
Egypt initially declared the group a terrorist organization in February. That ruling further isolated Hamas, which once found open support under Egypt's toppled Islamist President Mohammed Morsi. Egypt's new government recently has begun clearing a buffer zone along its border with Gaza Strip in an attempt to destroy a cross-border network of tunnels that Hamas considers a lifeline.
Read more »
Posted by Abu Pessoptimist at 8:46 PM No comments: