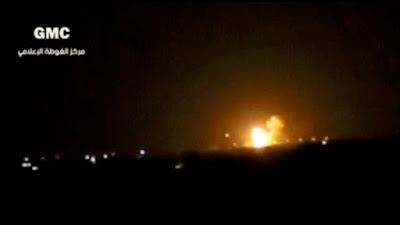 Israel struck an arms supply hub operated by the Lebanese group Hezbollah near Damascus airport on Thursday, targeting weapons sent from Iran via commercial and military cargo planes, Syrian rebel and regional intelligence sources said.Video carried on Arab TV and shared on social media showed the pre-dawn airstrikes caused a fire around the airport east of the Syrian capital, suggesting fuel sources or weapons containing explosives were hit.
Syrian state media said Israeli missiles hit a military position southwest of the airport.Two senior rebel sources in the Damascus area, citing monitors in the eastern outskirts of the capital, said five strikes hit an ammunition depot used by Iran-backed militias.
Israeli Intelligence Minister Israel Katz, speaking from the United States where he has been meeting US officials, told Israeli Army Radio: "I can confirm that the incident in Syria corresponds completely with Israel's policy to act to prevent Iran's smuggling of advanced weapons via Syria to Hezbollah ... Naturally, I don't want to elaborate on this.

Read more »
Posted by Abu Pessoptimist at 7:43 PM No comments: 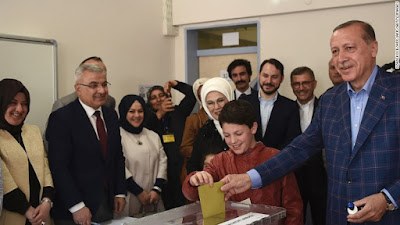 The Turkish president, Recep Tayyip Erdoğan, has achieved a narrow victory in a historic referendum on a package of constitutional amendments that will grant him sweeping new powers.
Sadi Güven, the head of Turkey’s high electoral board (YSK), confirmed the passage of the referendum on Sunday night, based on unofficial results.
The yes campaign won 1.25m more votes than the no campaign, with only about 600,000 votes still to be counted, Güven told reporters in Ankara, meaning the expanded presidential powers had been approved.
However, disparities persisted into Sunday evening, with the opposition saying not all ballots had been counted and they would contest a third of the votes that had been cast.
Güven said the YSK had decided to consider unstamped ballots as valid unless they were proved to be fraudulent, after a high number of complaints – including one from the ruling Justice and Development party (AKP) – that its officials had failed to stamp some ballot papers.
The no campaign said the YSK’s last-minute decision raised questions about the validity of the vote. But Güven said the decision was taken before results were entered into the system and that members of the AKP and the main opposition were present at almost all polling stations and signed off on reports. He said official results were expected in 11-12 days.

Read more »
Posted by Abu Pessoptimist at 2:47 PM No comments:

At least 126 killed in blast near Aleppo 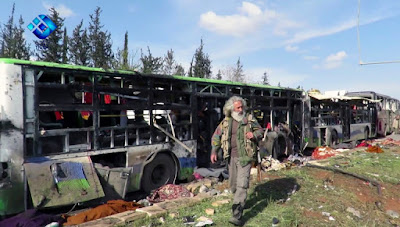 A large blast has killed at least 126 people in an attack near buses carrying Syrians evacuated from two besieged government-held towns, according to a monitoring group. The explosion on Saturday in Rashidin, west of Aleppo, targeted residents who were evacuated from the rebel-besieged towns of Fouaa and Kefraya in Idlib province under a deal reached between the Syrian government and rebels.The UK-based Syrian Observatory for Human Rights (SOHR) on Sunday said at least 126 people were killed in the blast, raising a previous death toll of 112. Syria: Evacuation buses leave Madaya, Zabadani for Idlib At least 68 children were among those killed, the monitor said. The Syrian Civil Defence, a volunteer rescue group that operates in rebel-held parts of Syria, had said on Saturday that at least 100 people were killed, while a report on Syrian state TV had given a death toll of 39.While there was no confirmation as to what caused the blast, state media said a "suicide bomber" allegedly used a van meant for carrying aid supplies to enter the area. The SOHR said the explosion came from a vehicle-born improvised explosive device. Al Jazeera's Adham Abul Hussam, reporting from the scene of the attack, said dozens of bodies littered the ground and ambulances were packed with victims. "The civil defence teams are recovering the bodies and searching for survivors. Many of the buses were totally destroyed," he said.
Posted by Abu Pessoptimist at 6:06 PM No comments:

The Internationale Crisis Group (ICG) reports:
Yemenis are starving because of war. No natural disaster is responsible. No amount of humanitarian aid can solve the underlying problem. Without an immediate, significant course change, portions of the country, in the 21st century and under the watch of the Security Council, will likely tip into famine.  (NB this is a slightly abridged version of the ICG report)

By numbers, Yemen is suffering from the largest food crisis in the world. According to the UN, an estimated seventeen million persons, 60 per cent of the population and three million more than were so afflicted at the start of the year, are food insecure and require urgent humanitarian assistance to save lives. Seven of the country’s 22 governorates are at a phase four emergency food insecurity level, one step away from phase five: famine. Areas affected include both government and Huthi/Saleh controlled governorates. UNICEF reports that 460,000 children suffer from severe acute malnutrition.

Read more »
Posted by Abu Pessoptimist at 11:20 PM No comments: 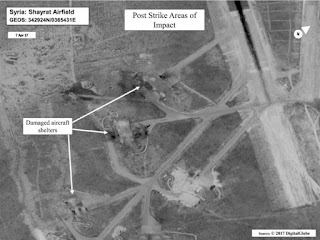 A joint command center made up of the forces of Russian, Iran and allied militia alliance supporting Syrian President Bashar al Assad said the U.S. strike on a Syrian air base crossed "red lines" and it would now respond to any new aggression and increase their level of support to their ally.
"What America waged in an aggression on Syria is a crossing of red lines. From now on we will respond with force to any aggressor or any breach of red lines from whoever it is and America knows our ability to respond well," said the statement published by the group on media outlet Ilam al Harbi.

Posted by Abu Pessoptimist at 4:50 PM No comments: 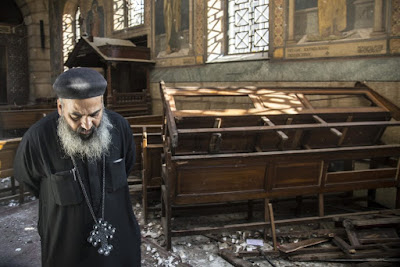 Updated. At least 44 people were killed in Egypt in bomb attacks at the cathedral of the Coptic Pope and a church in Tanta on Palm Sunday, and more than 100 people were injured. Egypt's president Abdel Fattah al Sissi ordered troop deployments and declared a three-month state of emergency.
Islamic State claimed responsibility for the attacks, which occurred a week before Coptic Easter, with Pope Francis scheduled to visit Egypt later this month.
The assault is the latest on a religious minority increasingly targeted by Islamist militants, and a challenge to President Abdel Fattah al-Sisi.
The first bombing, in Tanta, a Nile Delta city about 100 km north of Cairo, tore through the inside of St. George (Mar Girgis) Church during its Palm Sunday service, killing at least 27 people and injuring at least 78, the Ministry of Health said.
The second, a few hours later in Alexandria, hit Saint Mark's Cathedral, the historic seat of the Coptic Pope, killing 17 people, including three police officers who tried to stop the attacker from entering the cathedral, and injuring 48, the ministry added.
Coptic Pope Tawadros had been leading the mass at Saint Mark's Cathedral at the time of the explosion but was not injured, the Interior Ministry said.

Read more »
Posted by Abu Pessoptimist at 11:22 AM No comments: 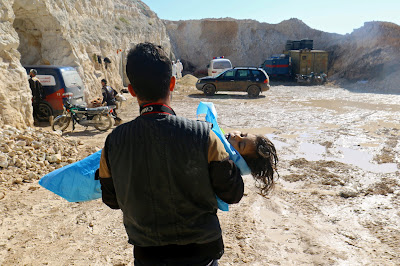 The United States has for the first time interved directly in Syria in the seven years that the conflict is running in that country.  On Friday it fired 59 cruise missiles at a government-controlled airbase in Syria, in retaliation for a suspected chemical weapons attack on a rebel-held town that killed scores of civilians.
The Pentagon said the Tomahawk cruise missiles were fired from two warships in the Mediterranean at the Shayrat airfield, targeting the base from where US officials believe Tuesday's attack in Khan Sheikhoun had been launched. At least six people were killed in the early morning strike, according to the Syrian army, which denounced the US "aggression" as a violation of international law.
US President Donald Trump said in a televised statement after the strike: "There can be no dispute that Syria used banned chemical weapons, violated its obligations under the chemical weapons convention and ignored the urging of the UN Security Council."

Read more »
Posted by Abu Pessoptimist at 12:23 PM No comments: