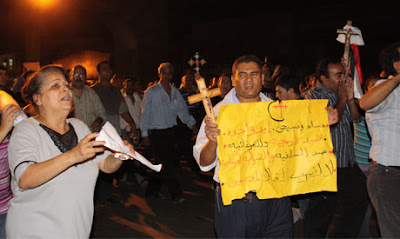 Update: The government and the military rulers of Egypt ought to be deeply ashamed of themselves. Attacks by thugs and the army on peaceful Coptic protesters on Sunday led to at least 24 dead and more than 200 wounded. According to an account in Al-Ahram Online the march of about 10,000 Copts started in the Shubra-quarter of Cairo and  went to the State TV building in Maspero. It turned violent when protesters were attacked by stone throwing mobs from on top of the surrounding walls while they were trying to cross the Shubra tunnel. A 15-minute battle ensued as the Coptic protesters fought back and hurled stones at their assailants.
Gun shots were fired in the sky, leaving terrified demonstrators wondering aloud if they were going to be shot.
During the attack panic ensued as women protesters were told to stand under the bridge for safety as Coptic youth tried to contain the march. After the battle stopped the march, once again regained its peaceful nature and continued towards Maspero.
On their way to Maspero they stopped in the neighboring Galaa Street and were attacked once again. A car sped through the crowd and randomely shot at protesters. The march continued once again to Maspero where the protesters were attacked again with increased vigour and violence.
An Ahram Online correspondent at Maspero reports seeing glass being thrown down at protesters from inside the State Broadcasting building in Maspero, while armoured personnel carriers were driven by the army through the crowds, hitting and running protesters over. Eyewitness accounts posted on Twitter detail people being shot by the armed forces and attacked by plain-clothed thugs, with fire consuming vehicles by the Nile.
Ambulances ferried tens of injured protesters away from the scene.

The Daily News has another video of chaos and anger.

Incredible that things like this can happen after the 25 January revolution.
Al-Ahram Online reports that the protest was organised by the Maspero Youth Union, a group of young Coptic activists to protest against the latest attack on the Coptic Church in the village of Merinab in Aswan when Muslim villagers attempted to block renovations underway at a Christian church in the majority Muslim village, charging that the building was a "guesthouse" that cannot be turned into a church. The protesters chanted, ‘raise your head high you are a Copt,” and “no to burning of churches.” The protesters also chanted against the army, shouting “the people want the fall of the Field Marshall Tantawi,” and chanted: “Tantawi, where is your army, our homes and churches are being attacked.”
The Egyptian military also attacked the office of Alhurra TV in Cairo and interrupted its daily night program "Alyoum" from going on air.The office of TV 25, which broadcasts from the Maspero area, was attacked as well. Both channels were transmitting live coverage of the clashes in Maspero between protesters, mainly Copts, and the army.
Posted by Abu Pessoptimist at 9:26 PM