Bloodbath at barracks of Republican Guard in Cairo 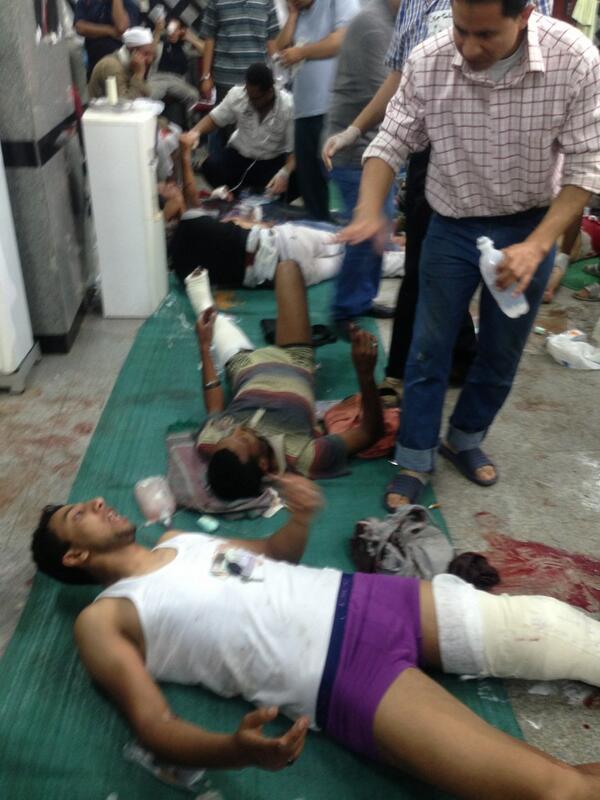 At least 51 people have been killed and some 300 wounded according to the Egyptian ministry of Health,, when early Monday morning heavy shooting took place near the barracks of the Republican Guard in Cairo, where reportedly the deposed president Mohamed Morsi is being held.
The military said "a terrorist group" tried to storm the Republican Guard compound and one army officer had been killed and 40 wounded. Soldiers returned fire when they were attacked by armed assailants, a military source said. The army said it arrested about 200 people, with “large quantities of firearms, ammunition and Molotov cocktails.”
The official spokesman of the Muslim Brotherhood, Gehad El-Haddad, who was near the scene, said the shooting broke out in the early morning while Islamists were praying and staging a peaceful sit-in outside the Republican Guard barracks.
In a reaction the Muslim Brotherhood called on Egyptians to rise up. On the Facebook page of the Freedom and Justice Party, the Muslim Brotherhoods political party,  a call was written to the 'great Egyptian people to rise up against those who want to steal the revolution with tanks and armored vehicles, even over the dead bodies of the people.''
The army after that surrounded and closed off the Muslim Brotherhood's sit in near the Rabaa Adawiya mosque in Nasr City. Eyewitnesses reported that from the mosque birdshot was fired at the the army. The army also tried to reopen the Salah Salem road, which had been blocked by the protesters since Sunday.
The developments at the barracks of the Republican Guard is bound to deepen the controversy between the Brotherhood and the supporters of the coup. Also it may complicate the formation of an interim government. On Sunday it became known that  Ziad Bahaa El-Din, a founding member of the Egyptian Social Democratic Party, had been offered the post of Egypt's new Prime Minister, after Mohammed ElBaradei, the former head of the International Atomic Energy Agency (IAEA) and leading member of the oppositional National Salvation Front, was tipped earlier as a possible candidate. ElBaradei's candidacy was dropped, however, after the Salafist Nour party voiced objections. The Nour Party was, contrary to the Muslim Brotherhood and is Freedom ad Justice Pary, in favour of deposing president Morsi. As the only Islamist force that supported the action by the military is opinion was important to the opposition and the military. But in a reaction to Monday's bloodbath the Nour party made it known that it withdraw its participation of the talks about the formation of a government.

So far the army had not taken too many measures against the Muslim Brotherhood. Some leaders, like Saad al-Katatny, the leader of the Freedom and Justice Party, Rashad Bayoumi, the deputy leader of the Brotherhood and Khairat el-Shater, one of the leading members had been arrested. But Katatny and Bayoumi were lateron released and Mohammed Badie, the 'supreme guide' of the Brotherhood was able to hold a speech on Saturday for the Mosri-supporters in Nasr City.
On Sunday hundreds of thousands of supporters and opponents of ousted Egyptian President Mohamed Mursi gathered in Cairo and Alexandria. Those demonstrations passed without major disturbances. But on Thursday and Friday similar gatherings led to nationwide clashes that claimed more than 30 lives.
Posted by Abu Pessoptimist at 11:31 PM