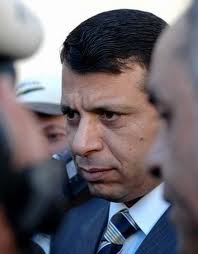 Mohamed Dahlan, once Fatah's security chief in Gaza and until recently one of the leading figures in Fatah, had been banned from the West Bank. Palestinian sources said PA Chairman Mahmoud Abbas has ordered his the expulsion amid allegations that he sought to engineer a coup. Last week Dahlan had been interrogated and was confronted by what was termed evidence that he planned to overthrow Abbas. After that he was told that he will no longer be welcome in the Palestinian areas until further notice, according to  Palestinian sources.
The sources said Dahlan has left the West Bank for neighbouring Jordan. In November, Dahlan, a member of the Fatah Central Committee, moved his family from Ramallah to the Jordanian capital Amman after a PA decision to reduce security around his home.
Dahlan has denied the alleged coup plot. He said the PA crackdown was in response to his criticism of policy, particularly negotiations with Israel.
The sources said Abbas, as head of Fatah, threatened to strip Dahlan of all positions in the movement. They said Abbas had ordered the dismissal of at least of 50 PA security officers believed aligned to Dahlan. One of those was Yusef Issa Yaakoub, deputy commander of the General Intelligence Services.
On 30 December the Fatah Central Committee said Dahlan had been suspended because of coup allegations. Dahlan was said to have garnered support within Fatah, including the Central Committee.One of his supporters, Abu Maher Ghaneim, has resigned. Dahlan's chief aide, Mutaz Khadeir, was also arrested by the PA. The sources said Khadeir was arrested in Ramallah on Dec. 31 for what was termed "security reasons."
Posted by Abu Pessoptimist at 11:26 PM