Rift in Fatah, did Dahlan plan another coup? 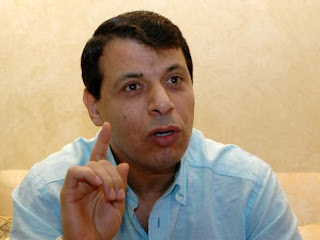 Muhammad Dahlan, former assistant Palestinian minister for the Interior, former Fatah police chief in Gaza and nowadays chief of the Palestinian presidential guard that protects president Mahmoud Abbas, is again in the news. In 2007 he was the main character in the dramatically failed attempt to seize the Gaza Strip from the hands of Hamas (with help from the US, see David Rose's story 'The Gaza Bombshell' in Vanity Fair)
This week he was spotted in Cairo where, on Monday, he had talks with Egyptian intelligence chief Omar Suleiman, after news had leaked out about a rift between him and Palestinian Authority (PA) President Mahmoud Abbas. Dahlan, who currently is also a member of the Central Committee of Fatah, told reporters, according to Al-Masry Al Youm, that his relationship with  president Abbas was one of "friendship'' and ''nothing but respect". He expressed "surprise" over what he called the "leaks referring to a problem between me and President Abbas." Such leaks, he added, "are only intended to sow confusion."

However, last months press reports suggested the existence of a serious disagreement between Dahlan and Abbas due to Dahlan's criticism of Abbas' policies regarding negotiations with Israel. Here is what The Palestinian Information Centre (close to Hamas) on 21 November reported (in Arabic):

"A Palestinian leader close to Fatah has revealed new details of what has become known in the Fatah milieu as the "Dahlan case," the incessant accusations against him for being the architect of a comprehensive plan to control Fatah and succeed Mahmud Abbas as president.
Two weeks after the Palestinian Information Centre disclosed the content of the plan sent by Fatah Central Committee [CC] member Muhammad Dahlan to the US Administration, which contains security proposals to topple the Palestinian government in Gaza and to control the Gaza Strip, the source related to our correspondent the existence of a connection between the abovementioned security document and the developments within Fatah, after Dahlan and other Fatah leaders, including CC member Nasir al-Qudwah, appeared before a commission of inquiry set up by the PNA presidency and headed by Fatah leader Abu-Mahir Ghunaym. The source explained that the investigation of Dahlan and a number of Fatah leaders followed on the heels of Al-Qudwah's harsh criticism of Mahmud Abbas, which was published in The Wall Street Journal and was later confirmed to be instigated by Dahlan.
Yet, the most serious thing that the sources disclosed goes beyond disagreements and verbal criticisms to practical action on the ground that Dahlan and a number of leaders supporting him are preparing. The source revealed that the US Administration received a letter from Muhammad Dahlan, Nasir al-Qudwah, Sultan Abu-al-Aynayn, and Tawfiq al-Tirawi stating that "Abbas is now unable to make peace but we are able to, and that he must be substituted by a personality that has the ability to achieve this." Moreover, and as proof of the seriousness of the offer, the letter suggests assigning the Interior Ministry in the Fayyad government to Dahlan and pledges to regain control of the Gaza Strip from Hamas according to the plan sent earlier. The source also noted that the US response has not arrived yet.  According to the source, the recent letter coincided with the rise in the pace of alignments within Fatah between a group supporting Dahlan and another comprising historic leader who oppose him, especially after the return of large numbers of Dahlan's supporters to Palestine after their exit from the Gaza Strip in the aftermath of the decisive military action that was carried out by Hamas."
Source BBC Monitoring Service  (quoted by The Angry Arab News Service)
Posted by Abu Pessoptimist at 12:34 PM