Abu Pessoptimist
This blogname was derived from a satiric Arabic novel by the Palestinian Israeli Emile Habiby. In the ''The Secret Life of Saeed The Pessoptimist'' he uses absurdism as a weapon against the (ir)realities of daily life in Palestine/Israel. I consider it to be an example for how events in Israel/Palestine best can be approached. The subtitle is from a book by Dutch author Renate Rubinstein. In a way that is also still my motto. My real name is Martin (Maarten Jan) Hijmans. I've been covering the ME since 1977 and have been a correspondent in Cairo. In 2018, I concluded the study 'Arabic language and culture' at the University of Amsterdam. I started 'Abu Pessoptimist' in January 2009 out of anger about the onslaught of that month in Gaza. The other blog, The Pessoptimist, is meant to be a sister version in English. (En voor de Nederlandstaligen: ik wilde in november 2009 een tweede blog in het Engels beginnen en ontdekte te laat dat als je één account hebt, een profiel dan meteen ook voor allebei de blogs geldt. Vandaar dat het nu ineens in het Engels is... So sorry.)

IS claims attack on Iranian parliament and shrine of Khomeiny 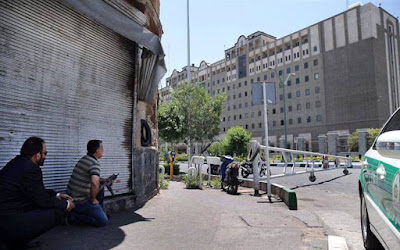 Suicide bombers and gunmen attacked the Iranian parliament and the Mausoleum of Ayatollah Khomeini in Tehran on Wednesday, killing at least 12 people in a twin assault. Islamic State claimed responsibility and released a video purporting to show gunmen inside the parliament building.
The attacks took place at a particularly charged time after Saudi Arabia and other Sunni powers cut ties with Qatar on Monday, accusing it of backing Tehran and militant groups."This terrorist attack happened only a week after the meeting between the U.S. president (Donald Trump) and the (Saudi) backward leaders who support terrorists. The fact that Islamic State has claimed responsibility proves that they were involved in the brutal attack," a Guards statement said.
Saudi Attackers dressed as women burst through parliament's main entrance in central Tehran, deputy interior minister Mohammad Hossein Zolfaghari said, according to the Tasnim news agency.One of them detonated a suicide vest in the parliament, he said. About five hours after the first reports, Iranian media said four people who had attacked parliament were dead and the incident was over.
At least 12 people were killed by the attackers, the head of Iran's emergency department, Pir-Hossein Kolivand, was quoted as saying by state broadcaster IRIB. Some 43 people were wounded.
"I was inside the parliament when shooting happened. Everyone was shocked and scared. I saw two men shooting randomly," said one journalist at the scene.
Soon after the assault on parliament, another bomber detonated a suicide vest near the shrine of the Islamic Republic's revered founder, Ayatollah Khomeini, a few kilometers south of the city, Zolfaghari said. A second attacker was shot dead, he said.
"The terrorists had explosives strapped to them and suddenly entered the shrine and started to shoot around," said the shrine's overseeer, Mohammadali Ansari.
The Intelligence Ministry said security forces had arrested another "terrorist team" planning a third attack.
Posted by Abu Pessoptimist at 6:52 PM