American missions in Cairo and Benghazi stormed, ambassador to Libya and 3 diplomats killed 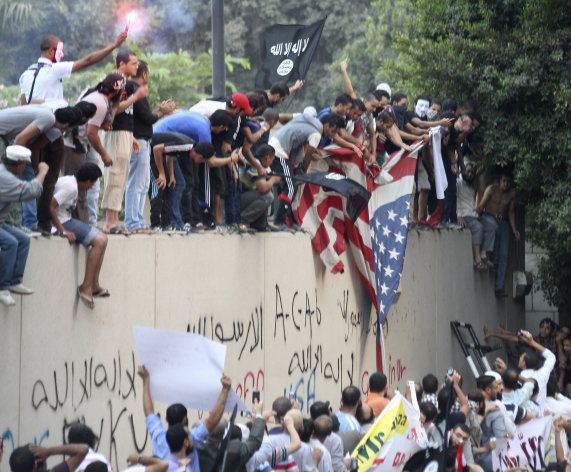 Protesters on the wall surrounding the American embassy in Cairo are destroying an American flag. (AP)

Third update Friday 14/9.
At least seven people were killed on Friday in demonstrations over a film made in the US that mocks Islam - as protests spread around the world. Three people were killed when the US embassy in Khartoum was attacked, Sudanese state radio said. In Tunisia, two people were killed and 29 wounded after crowds breached the US embassy compound in Tunis. There was one death in Egypt and one in Lebanon. Protetst spread to at least 20 countries, inlcuding Yemen, Bangladesh, Sri Lanka and Nigeria.
The New York Tikes in the meantime reported that the name Sam Bacile for teh supposed maker of the film was almost certainly a fake name. The maker's real name seems to be Nakoula Basseley Nakoula. He is he owner of a gas station and someone convicted of fraud.


Twice Updated. Protesters angered over a film that ridiculed Islam's Prophet Muhammad fired gunshots and burned down the U.S. consulate in the eastern Libyan city of Benghazi, killing the U.S. ambassador to Libya and three other embassy staff. In Egypt, protesters scaled the walls of the U.S. Embassy in Cairo, tore and replaced the American flag with an Islamic banner.
Ambassador Christopher Stevens and the other Americans died after the gunmen attacked the lightly fortified U.S. consulate and a safe house refuge in Benghazi on Tuesday night. The U.S. consulate was overrun and torched in a military-style assault, the ambassador left lost and dying alone in the smoke while rescuers ran into a deadly ambush as they sought to save survivors. The attackers used guns, mortars and grenades. U.S. and Libyan officials said the attack may have been planned in advance.

The protests in Libya and Egypt were sparked by outrage over a film ridiculing Muhammad produced by an American in California and being promoted by an extreme anti-Muslim Egyptian Christian campaigner in the United States. Excerpts from the film dubbed into Arabic were posted on YouTube.
A 14-minute trailer of the movie that sparked the protests, posted on the website YouTube in an original English version and another dubbed into Egyptian Arabic, depicts Muhammad as a fraud, a womanizer and a madman in an overtly ridiculing way, showing him having sex and calling for massacres.
Sam Bacile, an American citizen who said he produced, directed and wrote the two-hour film, said he had not anticipated such a furious reaction. Speaking from a telephone with a California number, Bacile said he is Jewish and familiar with the region. Bacile said the film was produced in English and he doesn't know who dubbed it in Arabic. The full film has not been shown yet, he said, and he said he has declined distribution offers for now. "My plan is to make a series of 200 hours" about the same subject, he said.
Morris Sadek, an Egyptian-born Christian in the U.S. known for his anti-Islam views, told The Associated Press from Washington that he was promoting the video on his website and on certain TV stations, which he did not identify. Both depicted the film as showing how Coptic Christians are oppressed in Egypt, though it goes well beyond that to ridicule Muhammad - a reflection of their contention that Islam as a religion is inherently oppressive.
For several days, Egyptian media have been reporting on the video, playing some excerpts from it and blaming Sadek for it, with ultraconservative clerics going on air to denounce it.

This is the trailer of the piece of junk Sam Bacile produced:


The Israeli newspaper YNet adds that following the spasm of attacks, filmmaker Sam Bacile who identifies himself as an Israeli Jew, has gone into hiding. Speaking on the phone from an unidentified location he remained defiant, saying Islam is "a cancer" and he wanted his film to make a political statement. He said believes his video will help his native land by exposing Islam's flaws to the world.
According to the Wall Street Journal, Bacile said he raised $5 million from about 100 Jewish donors, whom he declined to identify. Working with about 60 actors and 45 crew members, he said he made the two-hour movie in three months last year in California.
The film has been promoted by Dr. Terry Jones, the Florida pastor whose burning of Qurans previously sparked deadly riots around the world, who said Tuesday that he planned to show a 13-minute trailer that night at his church in Gainesville, Fla.
Posted by Abu Pessoptimist at 12:04 PM

I just read an article of Vali Nasr, in which he states that there is doubt that the 2 hours film exists. The english version of the 14 minutes video was already on You Tube in June, the timing of the dubbing in Arabic is interesting isnt it. Daniella, Cairo