Egypt terminates contract for the delivery of natural gas to Israel 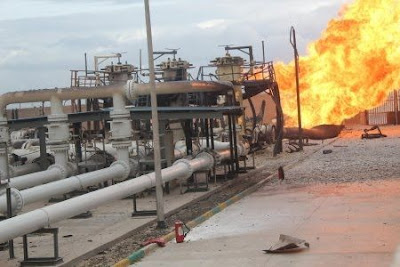 Damage from one of the 14 attacks on the pipeline carrying gas from Egypt to Israel.

The head of the Egyptian Natural Gas Holding Company said Sunday it has terminated its contract to ship gas to Israel because of violations of contractual obligations, Mohamed Shoeib, chairman of the Egyptian Natural Gas Holding Company (EGAS), told Al-Masry Al-Youm.
He said  that EGAS is using its right to terminate the contract due to a breach of the gas supply agreement by the East Mediterranean Gas Company (EMG), which operates the pipeline.A source within the petroleum ministry told Al-Masry Al-Youm that the dispute is purely commercial and has no other connotations.

Israeli prime Minister Benjamin Netanyahu downplayed the political significance of the Egyptian measure to cancel the gas deal. He said Monday that it did not stem from any sort of diplomatic developments or decisions, but was rather due to a business dispute between companies.
"The termination of the natural gas supply from Egypt is not motivated by political decisions, but is a business dispute between the Israeli and the Egyptian companies," Netanyahu said in a meeting with the heads of Israel Bonds. In earlier reactions, from minister of Finance Yuval Steinitz among others, Israel hinted at a breach of the peace treaty between Egypt and Israel.

The gas deal has since long been a source of controversy. Egyptian militants have blown up the gas pipeline to Israel 14 times since the uprising.On the Israeli side, the East Mediterranean Gas Company (EMG), which operates the pipeline, sought international arbitration in October because of the Egyptian side's failure to supply the quantity of gas stipulated in the contract — because of the frequent bombings.  EMG, Ampal-American Israel Corporation, and two other companies have sought $8 billion in damages from Egypt for not safeguarding their investment.
Under the 2005 deal, the Cairo-based East Mediterranean Gas Co. sold 1.7 billion cubic meters of natural gas to the Israeli company under a 15-year fixed price deal15-year fixed price deal between a private Egyptian company, partly owned by the government, and the state-run Israel Electric Corporation.  Critics in Egypt charged that Israel got the gas much too cheap and that Mubarak cronies skimmed millions of dollars off the proceeds. A court of appeal last year overturned a lower court ruling that would have halted gas exports to Israel. The suit had been filed by opposition groups.
For the long term, Israel is developing its own natural gas fields off its Mediterranean coast and is expected to be self-sufficient in natural gas in a few years.
Posted by Abu Pessoptimist at 1:29 PM