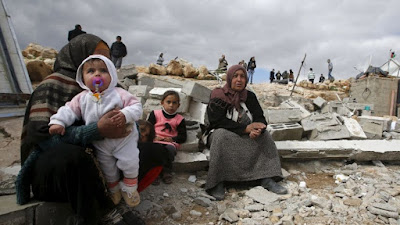 The Civil Administration in the West Bank on Tuesday demolished 23 homes and three outhouses in the southern Hebron hills villages of Jinba and Halawa. According to Israeli activists who reached Jinba by midday, shortly after the demolitions, 78 people had been living in the newly-built homes, including 60 children. In Jerusalem the Jerusalem municipality destroyed in thelast days four homes, which made 40 people homeless.
Fifteen of the demolished structures were in the south Hebron area in the villages of Jinba and Halawa. Many were built with financing provided by European and other foreign agencies. All 12 villages in the area developed in the 19th century from settlements of cave-dwellers, who had originally inhabited the numerous caves in the area.
Jinba and Halawa and the other 10 villages in the area have been waging a legal battle for 17 years in an attempt to prevent their evacuation and demolition so they can be used as army training areas. The European Union has been closely following the villagers’ campaign, and has repeatedly stated it would view their evacuation as a coerced uprooting of a protected population, a contravention of international law.
On Monday morning, the State Prosecution and lawyers for the Association of Civil Rights in Israel (ACRI), as well as the villagers’ attorney Shlomo Lecker, announced that a mediation process,  started in October 2013 om a recommandation of the Israeli High Court, had failed. To the surrprise of residents and lawyers, within hours of informing the High Court of Justice of this development, Civil Administration officials arrived in these two villages and marked 40 dwellings for demolition. Less than 24 hours later they returned, accompanied by the army, and started destroying the structures. They also temporarily blocked a road leading to Jinba and confiscated vehicles and five solar panels.
Prior to the process, the state’s position was that residents of eight villages must move to the village of Yatta permanently, allowing them to cultivate their land and graze their sheep in the area at times when the army was not conducting exercises there, namely on weekends and Jewish holidays. Two more periods for cultivation and grazing would also be allowed during the year. Permanent residence in the villages would not be permitted. The residents of four other smaller villages were permitted to remain in the area, according to the state’s position in 2012.
The demolition was interrupted and did not extend to all 40 structures that were slated for demolition after the Society of St. Yves – the Catholic Center for Human Rights – filed a petition to halt the demolitions with the High Court of Justice on Tuesday morning. The court issued a temporary injunction until the state’s reply is received in seven days. 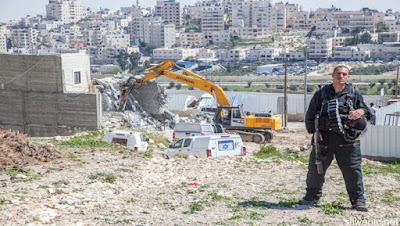 In total, in one week, Israeli house demolitions displaced at least 40 Palestinians in occupied East Jerusalem.
Posted by Abu Pessoptimist at 5:16 PM