(Reuters) - Ethiopia's parliament unanimously ratified on Thursday a treaty that strips Egypt of its right to the lion's share of the Nile river waters, raising the political temperature in a dispute between Cairo and Addis Ababa over the construction of a dam. The parliament's move follows days of irate exchanges between two of Africa's most populous nations over Ethiopia's new hydroelectric plant, which Egypt fears will reduce a water supply vital for its 84 million people.
Egyptian President Mohamed Mursi said on Monday he did not want "war" but would keep "all options open", prompting Ethiopia to say it was ready to defend its $4.7 billion Great Renaissance Dam near the border with Sudan.
Six Nile basin countries including Ethiopia have signed a deal effectively stripping Cairo of its veto, which is based in colonial-era treaties, over dam projects on the Nile, source of nearly all Egypt's water.
Ethiopia's late leader Meles Zenawi had delayed parliamentary ratification until Egypt elected a new government. "Most of the upstream countries have approved it through their parliaments. We delayed it as a gesture of goodwill to the people of Egypt until a formal elected government was in place," Ethiopian government spokesman Bereket Simon told Reuters. "We have a principled stance on the construction of dams. We are determined to see our projects brought to completion."


Egyptian Foreign Minister Mohamed Kamel Amr is expected to travel to Addis Ababa on Sunday for talks about the dam, though Ethiopia's foreign ministry has said there can be no question of suspending construction. The African Union has urged both sides to hold talks to resolve the row. 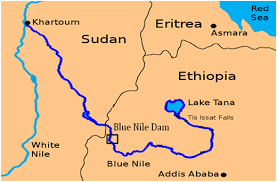 Under a 1929 pact, Egypt is entitled to 55.5 billion cubic metres a year of the Nile's flow of around 84 billion cubic metres. But, along with other upstream neighbours such as Kenya and Sudan, Ethiopia argues that this pact is outdated. Ethiopia has also dismissed the talk of military action as "psychological warfare".
Officials in Addis Ababa say a technical analysis compiled by experts from Ethiopia, Sudan and Egypt provides assurances to downstream nations that the dam being built by an Italian firm will not have a negative impact on the river's water levels.

Posted by Abu Pessoptimist at 7:10 PM