Students protest in Tunisia, in spite of government attempts to block cyberspace 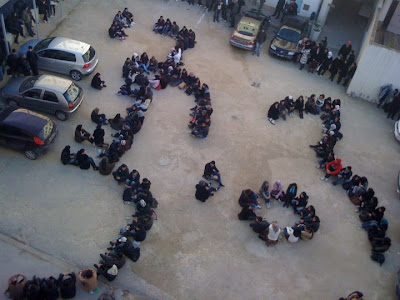 Body language: students of the Institute of Preparatory Studies for Civil Engineering form with their bodies the words Tunis hurra (Free Tunisia).

In spite of a total blackout from the side of the official Tunisian sources, bits and pieces of manifestations in Tunisia on Monday have been leaking out. AFP confirmed that clashes have taken place in Thala (250 kilometer centre West of Tunis, between 'lycéens' (high school students) and the police. The students started a peaceful demonstration, which turned violent after the police tried to stop it. After the police started to shoot teargas into the demonstration, the students set fire to tires and later on to the local headquarters of the ruling party Rassemblement Constitunionel Démocratique (RCD).
At the other hand in Sidi Bouzid, the city where the Tunisian intifada started some 19 days ago,  lycéens were able to hold a peaceful demonstration without interference. These demonstrations were by far not the only ones that took place on this day on which the winter vacations ended and the students returned to school. In the capital Tunis a sit in was held (see picture above) in the Prep Institute for Civil engineering (Institut de préparation aux études á l'ingénieurs). The students formed a slogan with their bodies (picture). In Sidi Bouzid was a sit in held by the students of the Institut de Presse et des études d'Information.
More details are not known, and that is due to the fact that the main war that is being fought in Tunisia at the moment is a cyber war of blocking the communications through the internet. The Tunisian government, which is probably world champion in the art of censuring the internet, switched to new tactics. It did not block Facebook altogether, which probably would have been to obvious and provocative, but in stead targeted individuals who it suspected of subversion and made it impossible  for them to enter changes on their Facebook pages. At the same time it blocked blogs and email-adresses. Guardian journalist Ben Whitaker mentioned on his blog that the Tunisian Pirate Party (whatever that may be) was dsitributing USB sticks with TOR, a software product that makes one unrecognizable on the internet, but it did not seem to help much.
However, also the governbement came under attack. The protesters got help from the outside group  Anonymous, an international group of hackers which apparently has been active only a few days earlier in Zimbabwe, which attacked various Tunisian government sites. Many of them after that either disappeared altogether, or showed a picture like this one: 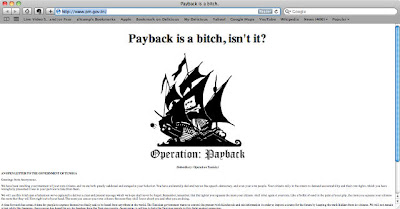 Al Jazeera English, one of the very few international media which at least tries to follow what happens in Tunisia, has more on this hacker group.
The group succeeded in disabling the following sites
www.bmvt.com.tn - Tunisian Stock Exchange
www.sicad.gov.tn - Tunisian Foreign Relations
www.industrie.gov.tn - The Ministry of Industry
www.commerce.gov.tn - Tunisian Government Commerce
www.carthage.tn - The Carthage Palace: Presidency of The Republic of Tunisia
benali.tn - Presidential Elections Site
www.ministeres.tn - Tunisian government site listing various ministries.
They were still not operating this morning.

In the meantime, more and more media give at least some attention to what is happening in Tunsia in background articles. But it remains strange that so few media follow the events of this country, which apparently although it is a one of the worst police states, has always been able to uphold a reputation of being stable and friendly to the West.

Posted by Abu Pessoptimist at 9:59 AM