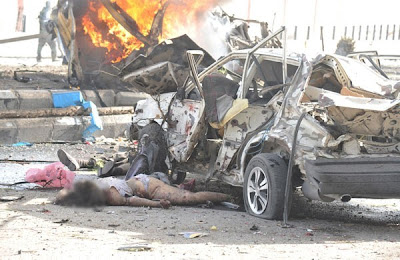 Two explosions hit the Syrian capital Damascus on Thursday, and the Syrian Interior Ministry said the death toll rose to 55 martyrs, while 372 people were injured including civilians and army members, the Syrian press agency Sana reported. Two booby-trapped cars loaded with more than 1000 kg of explosives and 'driven by terrorists' were used in the blasts, the ministry said in a statement issued Thursday. The statement added that fifteen bags of limbs and turn-off bodies from unidentified people were collected, pointing out that 105 cars crashed completely, in addition to 78 damaged automobiles in the blasts . State TV footage of the blasts showed massive destruction in the al-Qazzaz suburb to the south of Damascus. Damascus has been the target of several bombs in past months amid continuing anti-government unrest. An Associated Press reporter reported that the outer wall of a military intelligence building collapsed, although the structure inside appeared intact. 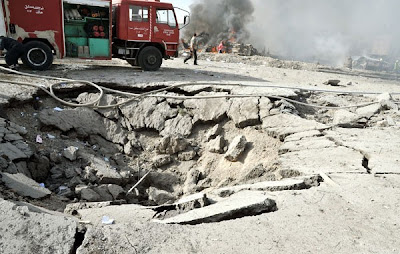 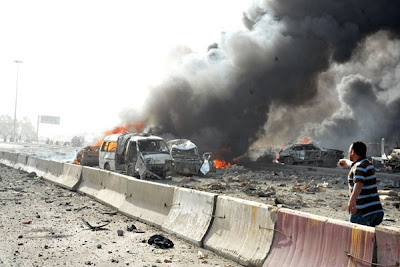 The last deadly blast was at the end of April, when some 10 people were killed in a suicide bomb attack near a mosque.

On Wednesday a roadside bomb wounded six Syrian soldiers escorting UN observers.The bomb, apparently planted underground, exploded after the passage of four vehicles carrying the UN team, hitting the troops travelling behind them.The blast hit as the convoy entered the city of Daraa, south of Damascus.
Who would be responsible for these bombs? Does it make sense to assume that the Syrian government  is bombing its own military intelligence buildings? Or its own troops?
Posted by Abu Pessoptimist at 9:40 AM