Building boom on the West Bank in 2011 and E-Jerusalem, according to Peace Now 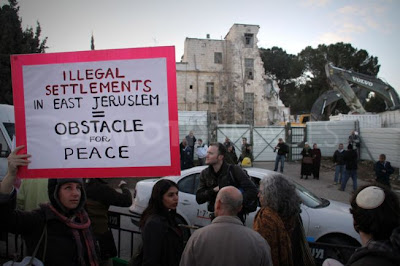 The demolition of the Shepherd Hotel in Sheikh Jarrah in East-Jerusalem. In its place an appartment complex is under construction, called Beit Oron.

Peace Now, that quite actively monitors the movements and building activities in th settlements on the West Bank, has registered and alarming increase in construction during the past year 2011. In a report issued this week it points to a 20% rise. For at least 1,850 housing units the building has started, 35% of them (650 units) in isolated settlements east of the planned route of the Separation Barrier. All in all
some 3,500 units were under construction during 2011 (started to be built or continued construction from previous years)

As far as Jerusalem is concerned, Peace Now counted that the number of planned new housing units has reached the highest level in a decade. Also the building of 55 new housing units
started in the middle of Arab neighbourhoods, while a brand new settlement (neighbourhood) was started under the name of Givat Hamatos.  Peace Now counted plans for 3,690 housing units which were approved for validation and another 2,660 housing units which were deposited for objections. Among the plans that got the final validation are the new neighborhoods of Har Homa C with 983 units and Givat Hamatos (stage 1) with over 2,000 units.
In addition, at least 823 construction permits were issued by the Jerusalem Municipality. After a permit is issued the contractor can start to build, and the number of permits can be a good indication for the number of actual construction starts.
The settlements at the heart of the Palestinian neighborhoods in East Jerusalem reached a new level with the beginning of the construction of new housing complexes for 55 families. 18 units in A-Suwane, 20 units in Sheikh Jarrah (the Shepherd Hotel) and 17 units in Ras El-Amud (the old police station). Furthermore, in 2011 the construction of stage 2 of the Maale Zeitim project in Ras al-Amud was completed with 60 housing units, some of which have already been populated. 
Apart from these increases in building activities the State also informed the court in 2011 of its intention to officially establish 11 new settlements by legalizing illegal outposts which are home to some 2,300 settlers in 680 structures. At the same time the State informed the court of additional delays of the evacuation of three outposts on private Palestinian land. In addition, the State announced the promotion of plans to legalize hundreds of units of illegal construction in the settlements (119 housing units in Shilo, 86 housing units in Kiryat Netafim, 27 units in Halamish and additional hundreds in Nofim, Hemdat, Rotem and Sansana.) 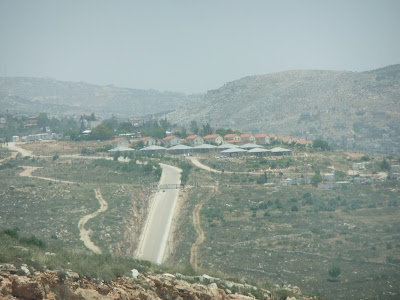 Settlement Rechelim.. will probably be 'legalized'.


The E1 area – the area between Jerusalem and Maale Adumim is critical for creating territorial contiguity of a Palestinian state from south to north and for the connection of East Jerusalem with the rest of the Palestinian state. It was recently reported that the Netanyahu government is promoting the realization of the plan to build thousands of housing units in E1 by evicting the Bedouins from the area and completing a system of roads.

See for the complete report the Peace Now site
Posted by Abu Pessoptimist at 10:15 AM